Pedro Barceló began playing drums at the age of 10 years. He studied percussion at the Conservatory of Murcia and Alicante (1972-1977).

Producer of the album ” The good inside” of Victor Coyote (1994 ), he also published his first book “Historias de un batería” in 2003. Pedro Barceló develop his teaching career in workshops and masterclasses with Yamaha and Paiste brands, which he is endorser. Since 2009 began its journey with Sweet Wasabi, personal project he shares with Laura Pamplona and where Pedro Barceló developed his role as producer and composer. With Sweet Wasabi has published two records, “Service Area” (2009) and “Slim Guru” (2013 ).

Birth of the new Drumsticks Pedro Barceló along with MISSOM

After a long process of research with much trial and error and thanks to the patience, commitment and, above all, friendship of this brilliant musician / drummer, we finally have the honor and pleasure of presenting the new Drumsticks Pedro Barceló.

The model developed in conjunction with the musician is now available for all followers of Pedro Barceló, Spanish drummer and composer.

About his relation with MISSOM, Pedro Barceló speaks with kindness: “I met Miguel Ralha, the head chef of MISSOM, in Évora (Portugal) during a seminar with Yamaha. He is a craftsman who loves what he does. I’ve always wanted to play his drumsticks and finally we have the model Drumsticks Pedro Barceló available!”

These drumsticks made in hickory wood are versatile and hardy, being particularly suitable for drummers to vary between different musical styles as jazz, rock, pop e flamenco. Length: 417mm / 16.42 “. Diameter: 14mm / 0:55 “. 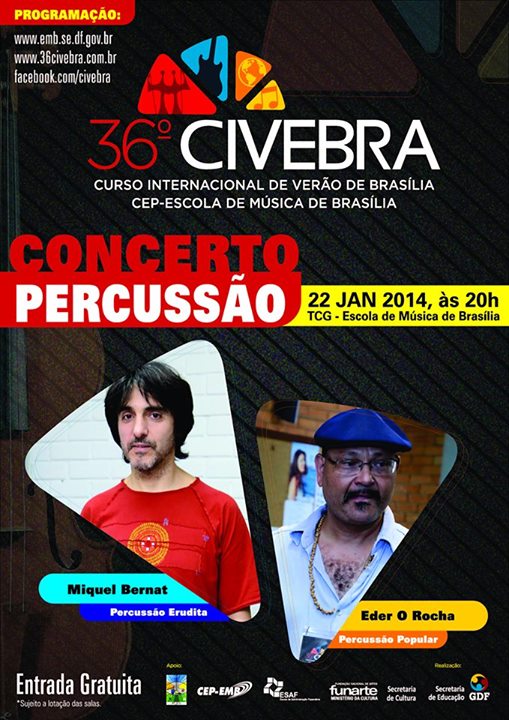 The famous percussionist Miquel Bernart was one of many artists participating in the 2014 edition of CIVEBRA in Brazil.

In the 22th of January, Miquel Bernart performed in partnership with Eder O Rocha in the 36º edition of CIVEBRA, an event held by the  Curso Internacional de Verão de Brasília.

The Civebra school is recognized as the leading course program in Latin Amercia and the 4th biggest course of the World regarding musical teaching and learning. The biggest difference between this course and others, is that Civebra is free for students and audience.

Miquel Bernat played in a performance of Classical percussion, demonstrating once again why he is considered one of the most important artists of this area.

In this performance, Miquel Bernart played with the model developed with MISSOM® named Requeta and a prototype drumsticks multipercussion created in partnership with MISSOM® – a new model that will be launched soon in our Shop online.

Miquel Bernat was born in Benisanó (Valencia) and is one of the leading figures of the international percussion. Musician of great versatility, he played with the Orchestra Ciutat de Barcelona (1988-1991) and the Royal Concertgebouw Orchestra of Amsterdam, in addition to contemporary music groups Ictus Ensemble Ictus Quartet Duo Contemporain, Brussels and Rotterdam, among others .

Teacher in Superior Conservatories of Music in Rotterdam and Brussels, has developed an intense teaching at the School of Music of Porto (Portugal) and in the Music Professional School of Espinho (Portugal), having been invited to teach at the University of Aveiro and the School of Music Catalonia. Miquel Bernat  was also the founder in Porto of Drumming – Percussion Group, with which he directed numerous concerts in Portugal, Spain, France, Belgium, Germany and Brazil.

Check the full Drumsticks developed by Miquel Bernart in this LINK. 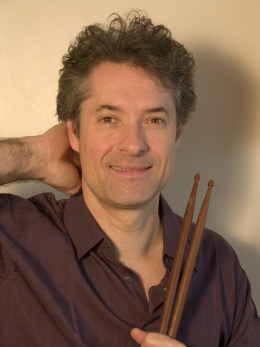 After studies at the Conservatoire Francis Brana Créteil, he entered the National Conservatory of Music and Dance of Paris for drumming lessons and chamber music with Jacques Delecluse and Michel Cals. In 1990, he won the first prize in each of these disciplines.

Later joined the Orchestre de Paris (in 1995), having made ​an exceptional course until today.

As a chamber musician, he performed with musicians of international renown. He is also a member of the Ensemble Carpe Diem (directed by Jean -Pierre Arnaud) and gives numerous concerts in France and abroad. He also organizes every summer an academy involving students who wish to develop with it.

Holder of Certificate of teacher, Nicolas Martynciow teaches percussion at the Conservatoire Hector Berlioz in the tenth arrondissement of Paris . He is regularly invited to give master classes in France and Europe.

His plays have been performed worldwide in prestigious venues, like Opera Garnier, amphitheater the Opera Bastille, Opera Comique, and many of them were recorded.

Developed alongside with MISSOM and Resta-Jay, the Drumsticks Nicolas Martynciow reflects his vision and passion about music and percussion.

You can see the Drumsticks Nicolas Martynciow in our website. 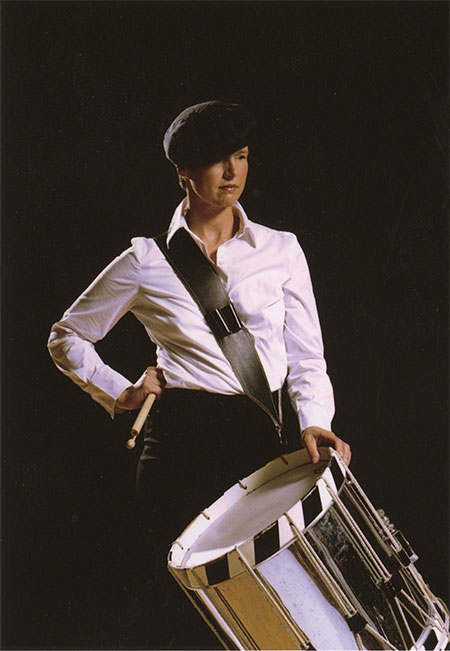 One big artist that uses MISSOM products is Edith Habraken, the phenomenal performer of Basler drum and marimba.

Born in 1965 in Holland, she studied percussion at the Conservatorium Amsterdam and lives since 1988 with her family in Basel/Switzerland.

Edith Habraken plays both improvising and composed pieces, using every object as a percussion instrument. The audience has a special loyalty to Edith Habraken and always reacts when Edith enters in the improvisation mode with humour.

Her specialities and favourites are the Basler drum and the marimba. She’s considered a virtuous player, always surprising and refreshing.

She also leads her foundation SMEH (Percussion- and marimba school Edith Habraken), and carries out her solo programm in the theatres.

Recently, MISSOM® and Edith Habraken had developed a special drumstick with her own name.

You can see the model Edith Habraken in our website trough this LINK.

The Drumsticks Edith Habraken are designed to Basel-drum and every inch was calculated with Edith Habraken. With a Big head top (almost spherical, excellent rebound and ability to obtain the fundamental tone of the drum.